Click on the YouTube video link in the article below, to watch the entire video on YouTube. You can also click on the 'Chapter' link time-stamps to go directly to the specific question or part of the video.

If you have any questions, comments or feedback - please post them as YouTube comments under the specific videos and we will clarify or reply as soon as possible.
Piaget Kohlberg and Vygotsky constructs and critical perspectives CTET CDP 05 English

It is a way of organizing knowledge.

For example, a Schematic Diagram shows what things are, where do they fit-in and how they are interconnected.

Vygotsky asserted that :
– development is complex and is effected by social & cultural influences
– Biological & Cultural development are intrinsically linked, and do not develop on their own

– He was a Soviet-Russian Psychologist
– He is a proponent of the Social Constructivist theory of Learning and Development
– The three important factors in his theory are Society, Culture and Language (SCL)

Chapter – 13:20 – Lev Vygotsky – Importance of Language in the Construction of Knowledge

Vygotsky considered language as one of the most important factors in the Construction of Knowledge – since it is not only a means of communication; but also used for processing information into knowledge.

Vygotsky argued that play is also important for an individual’s cognitive development. During play children are able to think in more complex ways than in their everyday lives; and make up rules, use symbols and create narratives.

ZPD consists of the activities for which the learner may have the required basic skills and knowledge; but can currently do with some help and support. Once the learner becomes comfortable with the activity, it will become part of the list that he can complete independently.

Chapter – 15:34 – Vygotsky – ZPD – An example on how the Zone of Proximal Development evolves over a person’s lifetime.

Scaffolding is the Temporary Support (During Construction) used till the structure (such as concrete slab) becomes strong enough to bear it’s own load.

Scaffolding is the Temporary Support or Assistance given to the Learner in the Zone of Proximal Development – i.e. the support provided to learners in such activities, which they can do, but only with some assistance or guidance.

Scaffolding is provided to the Learner by ‘More Knowledgeable Others’ such as Parents, Family Members, Teachers, Friends, Community Members

In simple words, a moral decision is when a person has to choose between a ‘Right’ and a ‘Wrong’ course of action.

There are Six Stages – ‘S-S’ and Three Levels in Kohlberg’s Moral Development Theory.

I.e. Each level has two stages.

The basis on which people take moral decisions at various stages of their moral development process:

Chapter – 31:14 – Criticism of Kohlberg’s Moral Development Theory
– The research methodology used had artificial & hypothetical dilemmas
– He based his theory on a sample group of Male participants only – Possible Gender Bias
– In real life, people define what is right or wrong separately, depending on the situation they found themselves in
– Moral Judgment may not always match Moral Behaviour

Chapter – 33:05 – Vygotsky emphasised the significance of the role played by which of the following factors in the learning of children?
– social
– hereditary
– moral
– physical

Chapter – 33:33 – As a teacher who firmly believes in the social constructivist theory of Lev Vygotsky, which of the following methods would you prefer for assessing your students?
– standardized tests
– fact-based recall questions
– objective multiple-choice type questions
– collaborative projects

Chapter – 35:26 – According to Piaget’s stages of cognitive development, the sensorimotor stage is associated with
– concerns about social issues
– imitation, memory, and mental representation
– ability to solve problems in logical fashion
– ability to interpret and analyse options

Chapter – 36:20 – In the context of Kohlberg’s stages of moral reasoning, under which stage would the given typical response of a child fall? “Your parents will be proud of you if you are honest. So you should be honest.”
– Social contract orientation
– Punishment-obedience orientation
– Good girl-good boy orientation
– Law and order orientation

Click on the YouTube video link in the article above, to watch the entire video on YouTube. You can also click on the 'Chapter' link time-stamps to go directly to the specific question or part of the video.

If you have any questions, comments or feedback - please post them as YouTube comments under the specific videos and we will clarify or reply as soon as possible. 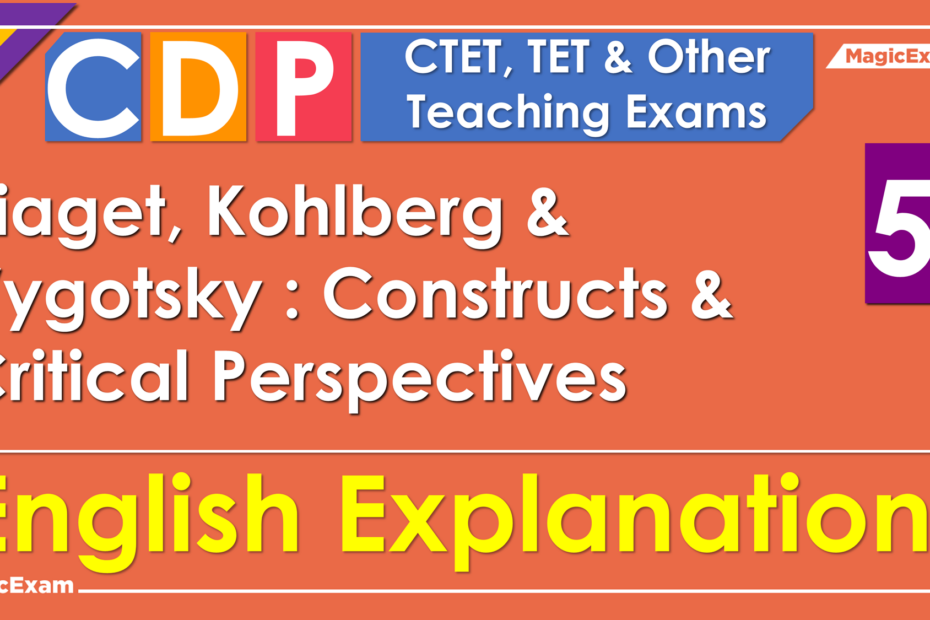